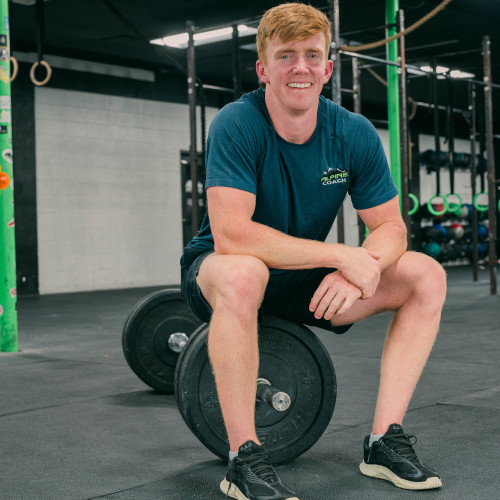 I was born outside of Philadelphia, PA and grew up competing in many athletic endeavors including soccer, tennis, basketball, and squash. I excelled playing soccer and tennis through high school but couldn’t cut it at the Division 1 collegiate level. After graduating from a boarding school in New Jersey, I attended Elon University where I played club soccer and worked for the Campus Recreation Fitness team. This was the highlight of my college experience and where my passion for fitness and strength sport was born. After graduating with a degree in Accounting, I Iived and worked in both Washington D.C. and Philadelphia, and competed in several sanctioned powerlifting meets. Powerlifting dictated how I trained, but it was a solitary pursuit and I wanted to expand my horizons. After a short stint with an Olympic weightlifting coach in D.C., I decided to give CrossFit a chance on July 4, 2014, and I haven’t looked back since. I moved to Denver in 2016 to pursue a Physical Therapist Assistant license, and I’m currently back in school pursuing graduate healthcare degree. Training for competitive CrossFit began in January 2018. Since then, I’ve made two appearances in the Pro Team division at Denver’s MBS Turkey Challenge, earned podium finishes at various local competitions, and contributed one heavy clean to Team Alpine’s southwest regional qualifying effort in 2018.

CrossFit has introduced me to close friends, facilitated professional networking opportunities, influenced a career change, and changed my perception of what it truly means to be healthy and fit. It’s been my daily pilgrimage. More recently, coaching CrossFit has been an opportunity to pass on the knowledge and values bestowed by the great coaches, athletes, and industry leaders that shaped my journey. I hope I can be a similar figure to as many members as possible.

The turning point in my life as an athlete came when I discovered powerlifting and, shortly after, CrossFit. I needed something to replace the competitive fire that soccer provided throughout my life – something in which I could determine my own success through hard work and persistence. However, CrossFit has proved to be much more than just soccer’s replacement. It’s taught me valuable lessons in nutrition, body maintenance, sleep, and being well-rounded in my fitness. CrossFit has facilitated outdoor adventure activities like fly-fishing, backpacking, and climbing. It’s also allowed me to reach my father and pass these values along to him as he fights various risk factors to chronic health conditions common in the geriatric population, while continuing to fly-fish all over the world.

While it might sound like a cop out, I’m impassioned to serve all demographics because of a wide demographic of people that I grew up with and currently work with between various jobs. I love coaching young athletes because athletics is still so fresh in my memory and CrossFit is something I wish I had to supplement my training for sports. I love coaching competitive CrossFitters because every good athlete is always looking for cues or small fixes to their technique that could push them a little more up the leaderboard. I love coaching working parents because I understand how much they have to balance and how much they value their precious hour at the gym. I love coaching older members because I’ve been directly involved in bringing CrossFit to my father, and I’ve seen how it’s improved his health and outlook on life.

Fill out the form for a free consultation

Where do you want us to send our membership pricing information?